TGS and Freedom Solar cut the ribbon on canopies of solar panels and modules over the company’s big parking lot at TGS operational headquarters in Houston. TGS has set an ambitious, fast-approaching goal of achieving net-zero emissions by 2030.

The solar canopies are projected to cover about 60% of their power needs in Houston — and TGS will save a lot of money in the process by lowering their electricity bills and generating their own electricity.

In this way, the TGS project offers a vivid, large-scale example of how solar is making Texans more free and more safe.

Freedom Solar — the leading turnkey solar energy installer in Texas and the nation — designed the project and installed the solar arrays for TGS. The company’s Chief Executive Officer, Kristian Johansen, noted that the effort represents “our first major step toward our goal of becoming a net-zero company.”

And, as I said, it’s pretty cool to open a major solar installation in the energy capital of the world. It’s no wonder why we decided to open a Houston office for our solar company.

At the end of the day, when it’s all said and done, we’re just passing through this planet. Projects like the TGS installation ensure that we’ll leave it a little better than we found it. In that way, these things are a really big commitment. We love working with companies that feel the same way about the solution that we do. So we love working on projects like this one.

As for the numbers, the installation consists of five solar arrays — and nearly 1,700 modules — that cover TGS’ employee parking lot. It will avoid the annual emission of 1.4 million pounds of carbon dioxide — that’s equivalent to planting almost 11,000 trees every year.

Add it all up, and the solar canopies will contribute to a more stable, more resilient electricity grid in Texas. As I said in a Texas Tribune editorial that ran earlier this month, every kilowatt that Texans generate themselves frees up power for other families and businesses. That helps keep Texas’ grid running.

So, yes, TGS will be a big winner from this project. But so will every Texan. There are far, far more of these to come; at Freedom Solar, we’re already fired up about the next one. 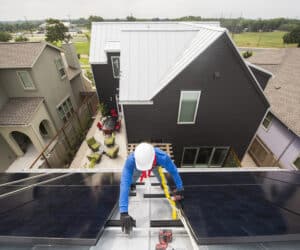